Assisting in Addison County: Wholesale bakery on the upswing in Bristol 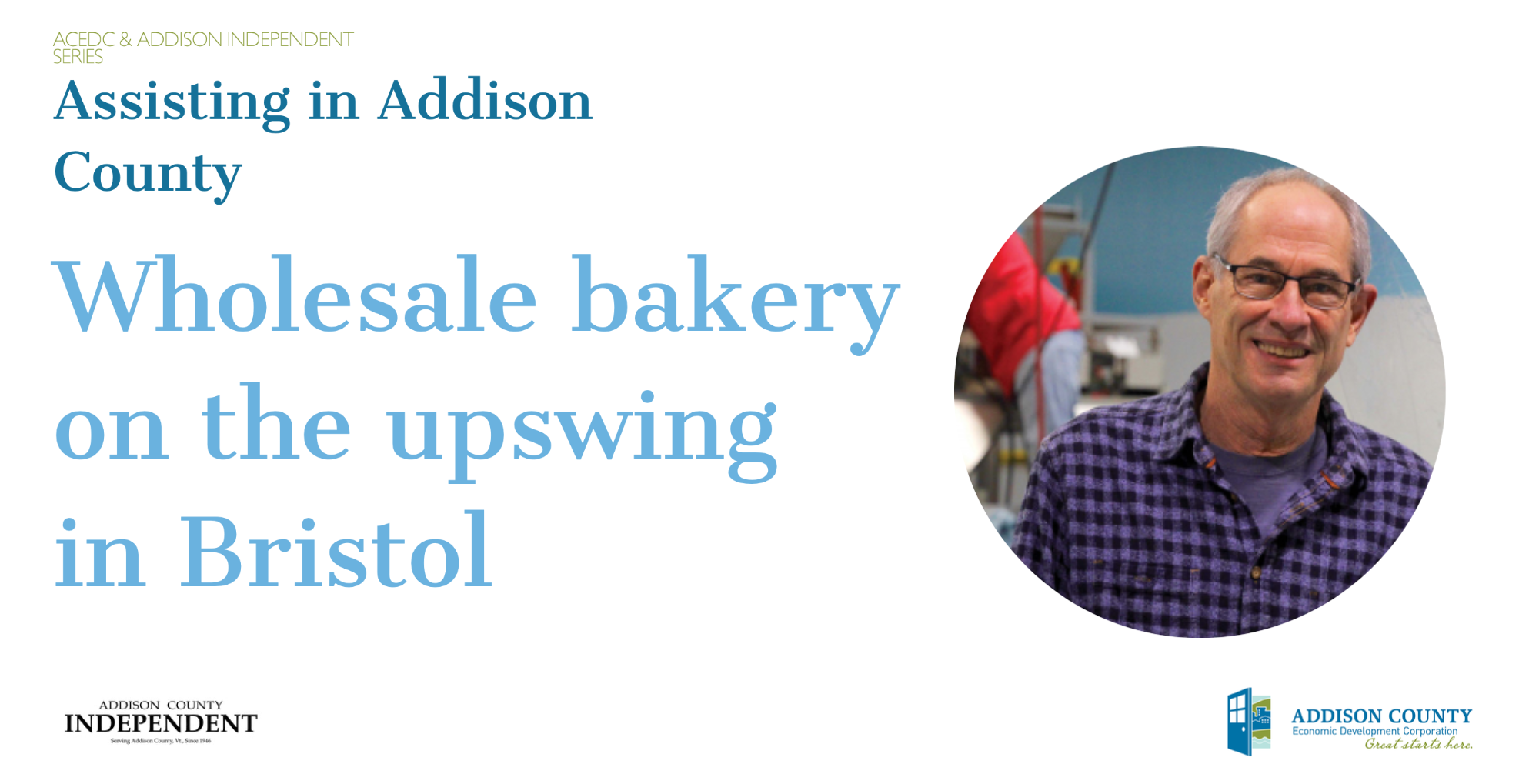 BRISTOL — Kevin Harper started out as a hopeful entrepreneur in 1977, making organic lip products in his kitchen in Ripton. Over the next 24 years, Harper expanded his idea into what became Autumn Harp, a multi-million-dollar company with more than 75 full-time employees.

Autumn Harp was relocated from Harper’s kitchen to a larger space in 1982, and again to a facility on Pine Street in Bristol a decade later. Finally in 2010, Autumn Harp Incorporated and moved to its current location in Essex Junction.

Although Harper was pleased to see the growth of his start-up, he ultimately decided to sell the company in 2001 to its current owner, David Logan.

“Twenty-four years was a long time,” Harper said in a recent interview. “I was 50 years old and wanted a change. It was time to give myself and my investors a return on their investments and for me to try something else.”

Harper’s new project was taking over the Bristol Bakery on Main Street in Bristol, and opening another branch of the restaurant in Hinesburg. During his time as owner of the Bristol Bakery, Harper decided to open a commercial-grade bakery in a portion of what had been the Autumn Harp facility on Bristol’s Pine Street.

In 2010, Harper partnered with three other local investors to buy the 5.5 acres of commercial space and redevelop the property.

From there, Harper served as the managing partner of Bristol Works!, a project aimed at transforming the former Autumn Harp campus into a business park. Harper began leasing a 12,500-square-foot portion of this facility in 2010, and transformed it into a commissary kitchen.

The location at 74 Munsill Ave. in Bristol was initially used to supply baked goods for Harper’s restaurants, though over time the commissary expanded to serve other institutions throughout the state before becoming a private label production company.

Harper explained the transition from supplying his restaurants to a standalone business.

“We were a commissary to supply our own restaurants (for several years), and then we were a wholesale bakery that was selling to Hannaford’s, Middlebury College,” he said. “A few years ago we committed to what’s generally referred to as a private label manufacturing business in the baked goods category.”

Harper’s company became known as Bristol Bakery Wholesale, though the company is currently looking to rebrand after Harper sold the Bristol Bakery & Café in Hinesburg to new ownership in early November.

“Calling this wholesale factory ‘Bristol Bakery’ is kind of a misnomer,” said Harper, noting that the company is currently raising funds in part to finance this rebranding mission.

The switch from commissary kitchen to private label company was made in part due to the challenges of running a commercial bakery. In order to keep up with demand as a bakery, employees needed to work long hours through the night to supply his two bakeries for the breakfast rush and Harper struggled to find people willing to do the work.

Bristol Bakery Wholesale chose to specialize in cookies and crackers, with the company’s first customer being Castleton Crackers, a mom-and-pop business based in Castleton. The wholesale facility continued to work with small, family-run businesses throughout New England, but Harper said ultimately Bristol Bakery Wholesale needed to expand past working with small businesses in order to grow.

“It became clear to me in 2019 that they’re great friendships and relationships, but we’re not making any money,” the 69-year-old business owner said. “We became extremely focused on finding customers who were at that next level. Companies that are better financed, that can afford to grow, and who are already at higher volumes and have opportunities to go much higher still.”

Today, Bristol Bakery Wholesale specializes even more exclusively in non-traditional, gluten-free baked goods. The choice to do so was made in part because the gluten-free baked goods market is less competitive than its gluten counterpart, and Bristol Bakery Wholesale is able to offer its customers ingredients that are non-GMO certified and organic.

“We now have manufacturing contracts with some very fast growing brands and we are reconfiguring our entire facility with additional automation in order to meet these needs. We will likely be tripling our sales in 2021 and have grown to over 40 staff already,” Harper said. “We are currently raising capital to accommodate that growth trajectory and are hoping to attract additional staff members in the near future to grow with us.”

Due to this growth, the bakery has had to purchase additional equipment to keep up with the demand. Harper said the business has shifted toward automation, purchasing machines to do the monotonous tasks that were previously done by employees. Trained machine operators are needed to work alongside these machines, and Harper said he is looking to hire employees that are able to fill that role.

“Prior to buying that (pouch-filling) machine, we were hand-filling trays. You have to take 15, or however many, cookies, fit them on a tray, and you put it on a scale,” said Harper. “Automation is our answer ultimately, as is a more sophisticated, specialized workforce that wants to learn this stuff.”

The machinery needed to automate Bristol Bakery Wholesale’s assembly line is expensive, but Harper and his team had built a solid relationship with one of their customers who gave them a commitment to a certain volume of baked goods and agreed to pay 30 percent up front to help finance the pouch-filling machine.

These grant funds must be used “for capital and construction improvements that support Vermont towns and regions,” an easy goal for the bakery as their rapid growth has created increased value in its buildings as well as added employees.

“The business was a good candidate for the BGS grant because they are an established business with a growth plan that involved specific capital investments (renovations and equipment) that would make the business more competitive and able to add jobs,” explained Fred Kenney, executive director of the ACEDC. “Again, timing was key. They had a capital investment requirement at the time the grant became available.”

Harper said ACEDC’s help setting up Quickbooks Enterprise for bookkeeping has been particularly helpful. The software allows the firm to keep track of incoming demand, inventory and invoices. Introducing the software system, however, was a long process and Harper credits the ACEDC for critical help, particularly recognizing Elizabeth Burdine, the ACEDC’s director of finance.

The new bookkeeping system has been extremely helpful this year when huge losses were followed by steep jumps in business.

“It is the pandemic that has caused such a surge in demand for the ‘better-for-you’ snacks that we produce and the online purchasing that has become the preferred way to buy these specialty food products,” said Harper. “In May, we had the worst month in our history, an 80% drop in sales. Then June came back better than we’ve ever had, and then July was bigger, August was bigger, September and October were still way up there.”

Looking ahead, Harper said he is hoping to hire more employees to help with the growth they’re experiencing. Harper said above all, he can offer employees the opportunity to grow with the company and learn key skills.

“I think our biggest selling point isn’t what we pay or our benefits, because we have minimal benefits since we can’t afford them yet. It’s the opportunity to grow into a career,” Harper said. “We have a dozen or so people who are learning and they’ll take that wherever they want to go. They can get a job anywhere.”